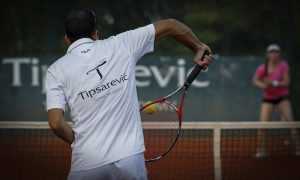 Tipsarevic Tennis Academy was founded in May 2013 with its training facilities located in Belgrade. Since then it has become one of the top tennis academies in Serbia and in the region. The primary goal of Janko Tipsarevic, as the founder of Tipsarevic Academy and one of the best tennis players in the world, has been to promote tennis in Serbia and to pass his experience gained throughout his impressive tennis career.

one of few tennis academies in the world which have facilities in two different locations. The first location, newly-decorated tennis complex has outdoor tennis courts with all supporting facilities, including restaurant the ’Tipsy Time’. Located at the sport center ’11. April’, in peaceful surrounding provides a great place for developing tennis skills. The second location – “Tipsarevic Usce” contain three additional courts, with long tennis tradition and great environment for developing young players. During the winter time, all courts are covered so players can use its full capacity.

Competitive program and experienced staff will help young players to improve technically, mentally and physically. Whether you want to advance your mental toughness, footwork, serves or physical endurance, we can create program for you.

If you love tennis, if you want to make the first tennis steps or if you just want to become a champion, come and join our team.